In July 2009, I was happily pregnant and excitingly, anxiously expecting the arrival of our second child.  For nearly eight months, I had been loving my baby in utero and explaining to our then two-and-a-half year old son that he was going to become a big brother.  Never, EVER did I imagine I would need to have an abortion…and certainly not one so late in my pregnancy.

At a routine 29 week sonogram, the ventricles in our baby’s brain measured slightly irregular and my perinatologist arranged for further testing.  Two weeks later, I had an MRI performed to see what was going on inside my baby’s head.   It was then that we were given the shocking and devastating news, news we were fully unprepared for.  Our baby’s brain had multiple defects caused by a neurological migration disorder which resulted in several structural abnormalities.  Our baby’s brain was missing a piece that connects the right and left hemispheres.  This is known as agenesis of the corpus callosum. The surface of the brain was malformed, as well as severely underdeveloped, a condition called polymicrogyria.  Where brain mass and tissue should have grown and been plentiful, only large pockets of empty space and gaping holes existed.

Despite all the prenatal care and testing I had throughout the pregnancy, this was not – and could not be — detected until I was well into my third trimester.

No amount of surgery, medicine or physical therapy could reverse, improve, or fix this horrendous diagnosis.

We learned that because of the severe brain anomalies, our baby would have had on-going seizures — 70% of the time.  And that was best case scenario if she survived birth at all.  In hindsight, I believe her constant, non-stop movements—movements that I so lovingly joked about throughout the pregnancy as being payback for having a calm, easy-going first child — were the result of seizures caused by the brain abnormalities.

We were told our daughter would lack the physical coordination to suck, swallow, feed, walk, talk or know her environment.  She would never run, play, interact with me, her Mommy, or her Daddy, or her brother Nate or her dog Misty.

If we had carried our baby to term, we would have needed a resuscitation order in place prior to giving birth as she was incapable of living without significant medical assistance.  She most likely would have seized to death upon delivery without immediate intervention.

After consulting with multiple doctors and genetic counselors, and after carefully weighing the options available to us, my husband and I made the heartbreaking decision to terminate the pregnancy.

We did not want our daughter to exist solely because of machines.  We did not want to bring a child into this world that would only be here in a vegetated state, if at all. As much as we loved and wanted our daughter, we didn’t want her existence to be one of constant suffering.

We did what we believe was the most loving, humane act a parent could do – and we did what was the right choice for our unborn baby, our son and our family.  We chose to terminate and put an end to our very much cherished baby’s pain.   Having to let our daughter go was the most gut-wrenching, impossibly difficult decision but we did it to spare her from knowing nothing but agony and misery.

I was stunned to learn after receiving our diagnosis just how limited my ability to receive abortion care was.

My diagnosis couldn’t have occurred and was impossible to confirm until much, much later than 20 weeks because brain development happens well in to the third trimester.

I was 32 weeks into my pregnancy when we had our abortion, just one week after learning the devastating news.  The only option available to us at the time was to travel across the country to Colorado to one of a handful of facilities in the U.S. that provides later abortion care. It was awful to go through the hell of ending my pregnancy and to have to do it so far from my home and loved ones.

If a 20 week ban is enforced, women in my shoes would have no option but to carry a pregnancy to term that will result in a baby non-compatible with life or die upon birth.

The week I had to endure between learning our diagnosis and when I could begin the termination process was agonizing.  Each constant movement of my baby – movement that for months had brought me such joy and reassurance — was like a dagger to my heart. Looking down at my full pregnant belly knowing how sick my daughter was, and knowing that she would not live was horrendous.  There aren’t words strong enough to describe the mental anguish I went through during those days.  Every minute felt like an eternity until I could finally end her pain.

To force women to endure this emotional trauma for weeks or even months and give birth because of abortion restrictions is reprehensible.

To add insult to injury, my insurance considered my abortion care “out of network” and covered less than 10% of the $17,500 upfront medical expense for the procedure, not including an additional $3,000 in travel costs to obtain care.  I was fortunate enough to borrow money from family members to pay for the procedure.  And with the help of legal counsel and more than a year of appealing, my insurance company finally agreed to cover the total costs. But the financial stress caused my family unnecessary anxiety during an already heartbreaking, devastating, and frightening time.

The shock of the expense, and fear for what that would have done financially for our family was an incredible blow.  To think women might not be able to make the choice that is right for their family because of lack of insurance is despicable.

Forcing women to look at a sonogram – or hear description of fetal parts prior to an abortion procedure.

Sonogram technology could not detect what my baby had.  Any description of her anatomy would have been a false picture of her health.  My baby had all 10 fingers, 10 toes, a beautiful face, picture perfect spin, lungs, heart and even a long femur bone – she would have been a tall child according to the technician reviewing the last sonogram I had before receiving our diagnosis.  All outwardly signs perfect.  But her neurological system and her brain were the complete opposite of normal. And yes, I am forever haunted by the words of that technician informing me that my child would have been tall.

As painful as it is to talk about, our stories need to be heard.  Families facing terrible prognosis must be allowed to choose what is best for their family and for their unborn child – including abortion as a viable, affordable option.

Women should not be made to feel ashamed should they opt to terminate.  I will never forget walking up to the doctor’s office in Colorado and seeing “ABORTION CLINIC” in big, bold letters on the side of the building.  Those words seemed exceptionally cruel to me at the time.  But I knew instinctively I would not hide behind them.  And while it isn’t the legacy I would have chosen for her, my baby’s existence has meaning and purpose in this movement. I carry her memory with me every day and am incredibly thankful that we could spare her from further suffering.  My son would not be the lively, out-going 5-year-old he is today had we been forced to carry our baby to term.  My living daughter and the baby I’m about to have would not be here if it weren’t for her sister and the fact that I could receive quality abortion care. 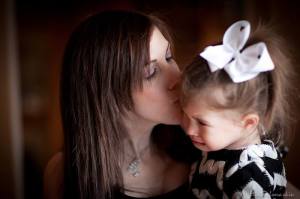